And now we continue with the second instalment of “Holes in Boats and the people who live on them” in 3D.

The next few days kinda passed in a weird blur for me as J and myself were kinda sleep deprived and I was knocked out of commission for a day due to migraines (probably brought on by the stress of the hole and lack of sleep).  Ideally I’d have been on the boat to help my Dad when he got down there with the tools needed to cut through our floor along with everything else but I had to get to work (I had taken 2 days off by then right off the cuff and work was piling up). So the next part of the fix is what I had relayed to me after the work was done along with some photos I have of the work.

So the previous night J and I figured out where the hole was below the concrete using measuring tape, painters tape, and some staffs to attempt to triangulate where the hole was in relation to the floor. The hole, as we had discovered, was no where near one of the hatches through the concrete. This photo I took by shoving my hand as far under the concrete as possible helped locate where it was approximately and from that we were able to mark the floor with the tape. 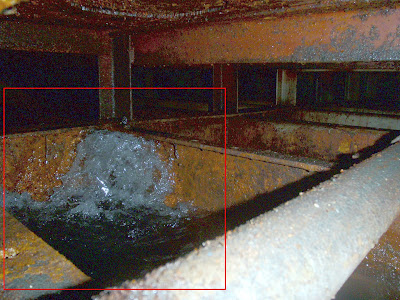 We used the staffs to triangulate where the hole was approximately from the hatch in front of the engine room and the hatch under the stairs. We found that the hole was located roughly here: 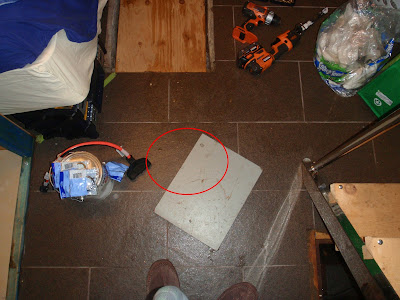 (Actually after we measured a few dozen other times we moved our mark to the left. This photo was taken and edited hastily earlier when my Dad wanted to know where we thought the hole was)

So while I was at work my Dad and Mom came down to patch it temporarily until we could get some sort of permanent fix in place. They brought down a seriously huge hammer drill with extremely strong drill bits along with a cutting torch for the steel below and proceeded to cut through the flooring. 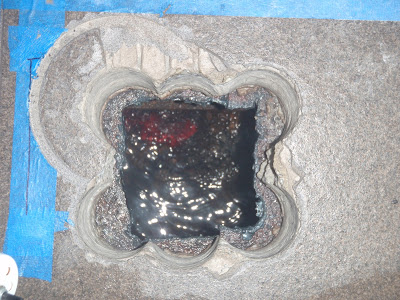 There they were able to see that the hole was apparently about the size of a quarter and started to figure out what needed doing. First though they noticed that something was restricting the flow of water a little bit. What turned out to be restricting the flow was possibly the unluckiest crayfish to ever live. Apparently the poor bugger had swam underneath my boat and got sucked against the hole. He was still alive too! The thing eventually got away after my Dad accidentally ripped it’s arm off (He was trying to pull whatever it was that was jammed there free when the arm came off and that’s when they discovered it was what it was).

So the way they built the patch was first the hammered into place a wood plug into the hole as best they could. Water was still coming in so they took a piece of 2×4 with some marine epoxy on the underside of it which they put in over top of the plug and with some large clamps I had on board force the 2×4 down into position. This worked very well and the leak was stopped permanently at this point.

Originally we had planned that shortly after this we’d head on over city side and wait there to go into the Toronto Drydock when it was our time. But we all agreed that although leaving later would increase the risk of us getting stuck due to low water levels it was better that than risking finding out that there was another hole somewhere else that’d sink us in deeper water.

At this point J and I were some of the last people on the island and it was getting more and more difficult to get back and forth from city side to our home. Even more after J left and the tender schedule to the island was shortened down to running only until 2pm. I had to take a water taxi back every night and even once I had to take the ferry at the opposite end of the islands and make the hike back across to the boat. A rather long walk to do when it’s pitch black out.

Regardless though I was able to sort out the boat and get it ready for our move over to the Drydocks to see what damage had happened to Pathfinder when she was finally hauled out of the water.

This article was posted in Boat and tagged Boat, Hurricane Sandy.
Follow comments with this RSS feed.