Crossing back to Pier 4

Not to get cheesy or really pat myself on the back for this but our departure from TIM and off to Pier 4 was incredibly smooth. How smooth?

Ya. So this time was literally the first time I had taken Pathfinder from dock to dock under any situation. The engines had a bit of an issue starting up but that oddly enough may be due to faulty wiring for the starter motor (the motor is expecting possibly 24 volts I only provide 12 volts). So it was a bit smokey starting up. We’ll be looking for a Mr.Scot when we’re back at TIM next year to fix the engines a bit (tune them up and see what is going on with the starter).

Before we got started on our trip we finished tidying up the deck and I had a quick chat with the people that’d be on board including my Dad, sister and my wife Jeannie… Marshy was there too but she’s not much help with the lines. My Mom went back to the city side to at least catch our lines for us when we got there. Side note having a quick conversation with everyone to say exactly what lines to use for docking on the other side worked out brilliantly. Although everyone was fairly experienced still explaining how I wanted to dock made the move that much easier.

We had a light wind from the North West pushing us onto our dock at TIM so we singled up the lines unhooked power and everyone got aboard to make ready the short trip over. I backed out nice and slowly re-remembering the fun of backing up my ship with such a small rudder (Higgins… I love your ships… But seriously what the hell is with the itty bitty rudder?). A 4 point turn later and we were out in the channel and headed in the right direction. Going across the calm harbor was a bit disorienting which sounds ridiculous but picture if you will… the wind was pushing the waves diagonally towards us while we were going forward creating a bit of an optical illusion of “Tokyo Drifting” a bit.

Once we got city side I slowed down and with a bit of guidance got right into the slipway (I was accidentally in reverse for 1 part of it so I had to quickly correct some movement but then we were in the channel on the other side and with 2 lines thrown out instead of tying up like we originally planned we had my Mom and Moe guide us in while I just helped at the wheel to get us past the bridge without a scrape. The 1 difficulty here is that Moe on the bow line was pulling the bow in which either rubs the boat on the tires bouncing it off or swings the stern out somewhat. A bit of some careful wheel work and we got by with room to spare.

At this point we shut down engines and tied up for a moment just to organize ourselves for the next maneuver. Spinning the ship around in harbor to face south which we do for 2 reasons.

The second one I’d recommend to any winter live aboard. Find out where the waves will be coming from and nose into it for winter. Pier 4 is a washing machine so doing that makes the winter storms a lot more enjoyable.

So with some ropes and help from some neighbors (Thanks to the C-Dock crew!) we got ourselves facing the proper way. After a few more line adjustments we unloaded a bunch of stuff that we don’t need for winter into my parents truck for storage at their barn and called it a day thus ending a particularly long weekend (we had helped my sister move the day before so we were already sore from all that). 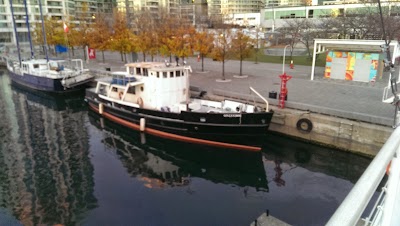 Let me tell you. This made a lot of the hardship over the past little while go away. We still have to clean up the ship a bit from the refit fiasco and knuckle down for winter… But what a rush bringing the ship in without any incidents.

Thanks to all my deck hands on this trip!