Although I haven’t been posting with any regularity lately don’t take that for a lack of effort on my part. I’ve been trying to sit down and do a decent post to update what has been going on but life hasn’t been…. exactly…. squared away lately.

Work has a habit of getting in the way of any sane sort of scheduling which means that what little work I’ve been doing is getting sidelined by being exhausted after work. On top of that there is the added fun of a HUGE renovation that was going to happen at the beginning of this season but got delayed until now.

Not the entire ship mind you. But the LARGE part will be done. That includes the entire exterior of the hull, the bulwarks (the raised “walls” on the side of the hull), and the main deck itself. 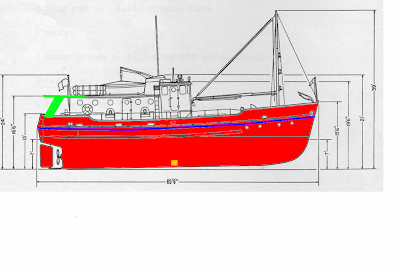 So to explain the photo a bit the red is getting repainted, the blue line represents the main deck which is also getting repainted, the yellow square is where our defunct sensors (odometer and depth sounder), and the green is a new overhang that we hope to install to give ourselves shade during summer and a little more protection during winter.

Basically a LOT of work.

First we had to find a ship yard that could handle the size and weight of our ship. We settled on Ship Shape based in St.Catherines, Ontario since we had a fairly ringing endorsement from a friend of ours plus their costs seemed reasonable.

Second we had to schedule when to get there and get hauled out, and thus the first time a weird thing has ever happened for us with our dealings with the marine industry began. This SOUNDS like it’s going to be a negative… but it’s not. Just I’m in utter shock that we were asked if we could come earlier…. EARLIER! I have never had anything happen on time from the marine industry… It’s kinda wild. Anyways this worked to our advantage, but it did cause a huge panic on our part since we needed to pack and go faster since the schedule bumped up by nearly a month.

Finally we had to get the boat there. We picked a good weekend and got a crew together including my Dad, sister, Aunt, her son, and my brother in-law. Jeannie was off studying for exams that she has in a few months. That was a… fortunate thing for her oddly enough. The day we picked to move was Saturday the 16th of August. The weather report LOOKED good, and LOOKED like it’d be a bit windy… But mother nature is nothing if not fickle. So instead of wind from the South West it was directly from the West and upwards of 53 km/h gusts of wind. The trip over was crazy rough. We were literally fighting every single foot of the way from 1/2 way across the lake to just inside the channel. The galley had stuff thrown everywhere, one of our passengers had… thrown up in the head (fortunately in the toilet), the cargohold had all of it’s furniture thrown everywhere it was a mess. I had hoped to take photos the entire way with geo-tagging but instead I spent my time holding on for dear life.

Jonathan from Ship Shape had suggest that we may want to delay until Sunday when the wind would’ve been lower… I didn’t listen… and boy oh do I wish I had. The next day was gorgeous… No rain… Barely any wind… Oh well. Live and learn.

ON the up hand undocking the vessel I pulled the most amazing 3 point turn to get the boat off the dock safely. Pretty amazing maneuver really. Basically the easiest undocking we’ve ever had ever. Really was super proud of myself.

Eventually we got there in around 2 and a bit hours regardless of the waves crashing against us and throwing us around. NOTE: We’ll never be going out in over 20 knot winds in the lake again. 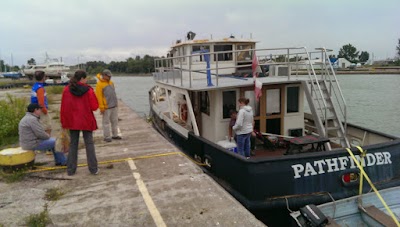 Next post (coming soon) will have the photos from the rest of that day when we got lifted out and some of the work that has been done to date.

Special thanks to the hardiness of the entire crew! Thanks especially to Dad for taking the helm when things started getting rough and harder to handle the ship.