So although this is the 3rd year I’ve been at the Toronto Island’s Jeannie and I have very rarely (if ever) participated with the events that go on on the islands themselves. It’s usually because we’re busy or our schedule for not being on the island doesn’t line up with theirs (either we’re up north at my parents, or out with friends, or just… out…). So this year we had a bit of luck and earlier we participated (sorta) in the Toronto Island Marina’s “Christmas in July” celebration (we literally got back to the Island’s the day of the celebration so we just had enough time to plug in our wreath from normal Christmas for the judging… Good thing I hadn’t taken the wreath down from Christmas eh?). We got an honourable mention!

Any ways this past long weekend I had a whack of stuff I wanted to get done on the boat (My next post will be about that) since we were going to be hiding out on the island away from Caribana going on at Toronto city side (turned out to not be as apocalyptic as we had initially anticipated traffic and wave of humanity wise). When one of our friends on the island mentioned to Jeannie (and someone else mentioned to me earlier in the week) if we were going to participate in the Gala. We decided to go to the first night at least and check out the other nights if we weren’t too tired from all the work we were going to do on the boat. Turns out that the first night is a play done to music (provided by a local Dixie band) followed up with everyone that went there participating in a “lantern parade” through Wards Island and ending with a bonfire at one of the beaches with fire dancing along the way… Ya. There was a lot going on.

SO like I was saying the party started off with a Dixie band playing and started shortly afterwards:

The play was about how this was the year of the anniversary of the war of 1812 and specifically how we had the help of the British and local native people push the US back (represented by a guy on stilts that vaguely looks like Uncle Sam waving a huge American flag). What was kinda funny was that some people were booing “Uncle Sam” there and a few other people they knew were Americans (in a playful manner not malicious no worries). The first photo there shows some of the lanterns people made.

Next up we all joined in a parade through the homes of Wards Island and then out to a sort of mini “volley ball beach” for part 2 of the play I guess. Which included fire dancing and some singing by the locals.

The fire dancing was pretty cool really. Lots of fire being flung around on hoolahoops, staffs, and sticks etc. The singing was ok but very quiet because of how far away we were. Oh well. But it was very nice sounding.

Next after that we all went to the beach where they started the bonfire!

During the bonfire a canoe came over that was shaped like a dragon and had a rather large blowtorch throwing blue flame out it’s mouth. They also set off paper balloons into the air. Most of them hit the lake but 1 of them made it quite far… Like to the point where everyone there went very quiet because we were worried that it’d crash in Toronto or Billy Bishop Airport. So ya. That was fun.

Overall it was a great time with a few friends there and loads of nice strangers (to us any ways) all hanging out talking and carrying on. The water by the bonfire was nice to walk in to cool off from the day as well and the moon was pretty awesome to look at since it was a deep red and nearly full on the horizon.

I can’t wait till next years! 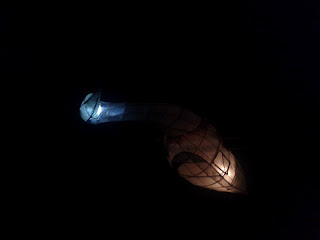 We didn’t make it to any other events that weekend (dances, bands, dinners, drinks etc.) mostly due to us being super busy on the boat or because of the torrential downpour we had later on in the weekend but next year we’ll definitely attend again.

Note to self… Bring a better camera instead of my cellphone.