Winter is here to stay

1 thing that is a bit of a bummer and bonus about living in Toronto and global warming is that winter doesn’t really start until mid January now. This sucks because frankly I like snow. Snow makes things nice and white (Toronto looks clean while its snowing for instance!), it also has a sound dampening effect on the city itself so you can really just enjoy the snow by yourself despite all the people in the city. Basically the more winter is like Charlie Browns Christmas the better. The part that sucks mind you is that you need it to be cold to have snow… which wouldn’t be a big issue if we still weren’t trying to iron out heating on the boat at the moment but at current we do have to abandon ship once in a while because it’ll get too cold. I hope by this week to get most of the radiators attached. This weekend will be the big push for completing the heating system, but FRIDAY I’m taking off because I’m off to the Toronto Boat Show. I hope to score some deals or at least find out what sort of gear I can get and is available this year to make life more comfortable on the ship.

Although I’m making the boat sound slightly uncomfortable it really is my favourite place in Toronto. The neighbors are quiet, the view is dynamite, and the commute is awesome (10 minute walk). Plus every time I work on it there’s a noticeable difference on the interior. Before the weekend I put down some more plywood flooring to get ready for the radiator up in the pilot house and earlier in the week I installed the radiator in the bathroom. So we’re making good progress. Just need to invent the 48hr day I think. 😛

Here’s a few choice pictures of Pathfinder during the snow storm we had just last week. 6 inches is quite a lot for Toronto really lately especially within like 10hrs or so (basically this all fell overnight). 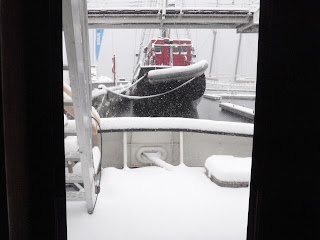 A view out our back doors. The ship behind us is the Kajama (apparently pronounced Ka-ya-ma). As you can see though there’s 6 inches of snow on the back rail there. 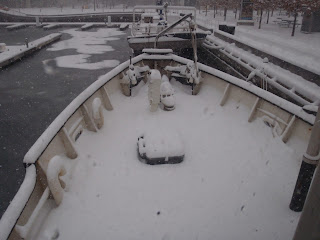 Our front deck buried in snow. Ok ok. So not exactly HIP deep since we use a broom to just push the snow off our decks but still pretty neat. 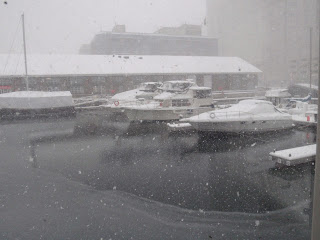 Our neighbors all snug in their slips. 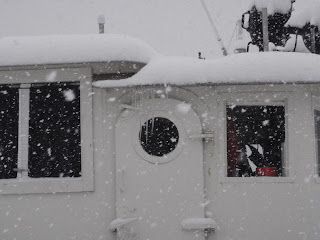 Yup. Icicles on are hanging from the “eaves” on our boat. 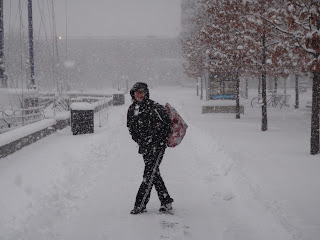 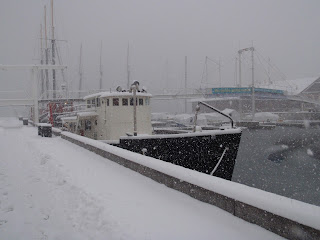 Bow shot of Pathfinder. This spring I hope to paint in her military numbers of T-509 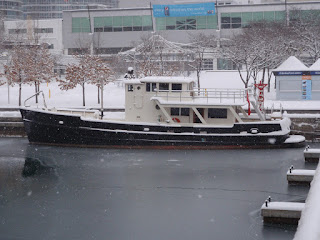 Pathfinders port side. The little blue square in the side of the hull is from a hole we cut recently so we could attach the exhaust nozzle for the Webasto heater we have. 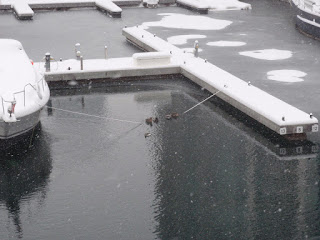 We usually have more ducks hanging around (like more than 30 at times) but today there were only these 5 guys. Apparently they weren’t too keen on staying in the cold water and had taken to standing on that ships line. As a side note it’s not frozen there because of the boats turbulence machine to make sure his boat doesn’t get damaged by ice.

This article was posted in Boat, Fixed, News.
Follow comments with this RSS feed.