This is the total path of T-509 from it’s creation to now. If you click on the pins you’ll go to a blog entry about what (and when) that pin occurred. Note that each pin represents a location I can confirm at a specific time frame. Right now the map looks like it’s suggesting that T-509 went up the Mississippi, but at current I have no information to confirm or deny that.

Now more on the vessel itself.

Our ship is a modified 2001 series T-Boat built in 1954. Originally these boats were built for the Korean war (more specifically the US at the time thought that there was going to be a second Korean war so they started building boats in reserve). This type of ship was specifically designed to cruise on up the rivers of Korea with a load of troops, munitions, medical supplies and small vehicles (I’ve seen a photo of one of these craft carrying a small tank on the fore deck in an extreme example). Primarily these vessels were built to be tough with their unloading technique frequently being to ram itself ashore, tip over slightly (the bottom of the hull is fairly flat), unload, then use the original Buda diesel engine to rip itself back into the river and go for more, sometimes all while being shot at. 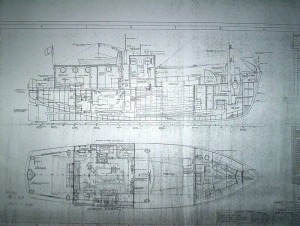 The original blue print for our boat.[/caption]

T-509 specifically never saw any combat and was (as mentioned) built in reserve in New Orleans, Louisiana. After it’s launch T-509 has had many roles ranging from a fishing vessel, training vessel (for the U.S. Army and just cadets) and during the 80’s was a research vessel in the Great Lakes to see if the Environmental Protections Act (EPA) was in fact having any effect (Weirdly enough after it’s stint doing that it was bought and moved to the east coast around the Cape Cod area and East Port Maine which is where I bought it and brought it back to the Great Lakes). The pilot house has been modified by having it raised and moved forward by several feet as well as getting the overhangs on our top deck with the rails.

Also the ship itself has gone under a number of names including Nocomis, Clear Water, R/V Dambach, and simply T-509. Pathfinder is the name that was given to her 2 Captains ago and the name has stuck.

I bought this vessel in 2010 and moved on later that same year. Since then my wife (girlfriend at the time of purchase) and I have been slowly working on converting the vessel to be a full time live aboard.

This is a photo from our first winter.[/caption]

Some links to other T-Boat pages: