So as Sandy has finally passed us and we’ve managed to weather it relatively fine in comparison to other locations I finally have a few minutes to write an update as to what happened to us during the storm.

First I’ll tell you what our plan basically was for the storm.

Hurricane Sandy however had other plans.

We have been very hard aground for quite a while at the marina. Lake levels have been incredibly low this year. Not so shallow that we can’t get ourselves out but it is at a concerning level (Side note: We’re right now at the low point of the lake cycle so with any luck next year will be more regular). This is nothing to totally worry about on a normal year with normal weather.

The Hurricane brought with it extreme pressure changes and waves even in our protected marina (the waves had white caps in some of the basins because of the wind for instance). The Lakes aren’t affected by tides but what we do get is that big storms push large amounts of water around the lakes giving us something similar. Typically this is a gentle process but not under these circumstances. As a result we went from hard aground to floating (something we hadn’t been doing for near a month at this point) in very short time spans. Combine that with the waves and we started pounding on the bottom.

The Toronto Islands are mostly made up of landfill and sand. So buried below the soft sandy soil could be anything including concrete, steel, heck anything that is hard and ungiving basically. The pounding on the bottom essentially punched a hole in the bottom and a leak formed.

J and I were mostly in the galley keeping an eye on how things progressed outside and trying to keep our cats calm. Cosmo (our black cat) frankly didn’t give a crap what was going on and was lounging upstairs with us. Martini (our tabby cat) started acting odd. Normally he’s a rather skittish cat that doesn’t particularly like being held too closely. But he was running up to us and jumping in our laps. Stay for a bit. Jump off. Then run to the stairs. He did this over and over until J decided to follow him to the top of the stairs in the cargo hold. I was on the phone with my parents when she suddenly yelled for me to come on downstairs and that there was a problem.

What we found was that there was nearly a foot of water above the tile flooring in the cargo hold and rising. We do have bilge pumps available but they are 110volt pumps and we don’t have them plugged in, we also didn’t have any high water alarms installed either. This I know is a grievous error and not a good idea in any boat and I can only blame myself for not having such systems in place earlier (the 12volt pumps that were already in there from before have never worked).

J and I quickly jumped into action and threw in all out pumps that we had into the bilge of the cargo hold to try to make headway on the water before we try to totally identify where the leak was coming from. 1 pump was starting to slowly make headway but I threw in a second anyways just to make it go down faster. Once we started making headway I was able to take some photos. 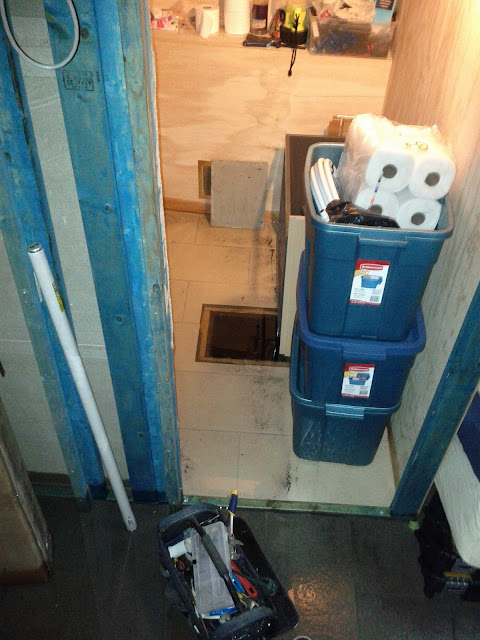 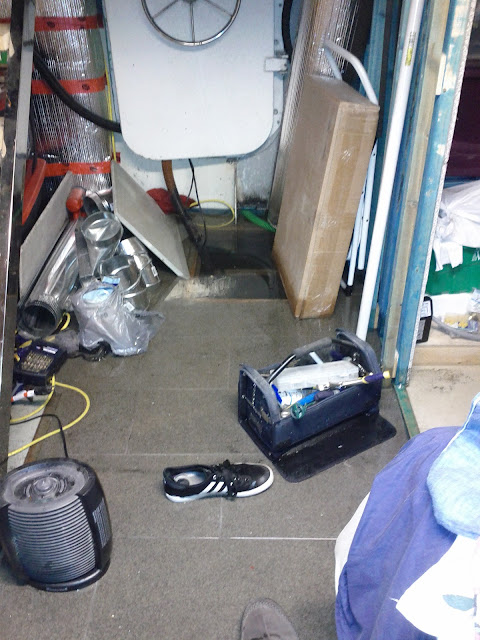 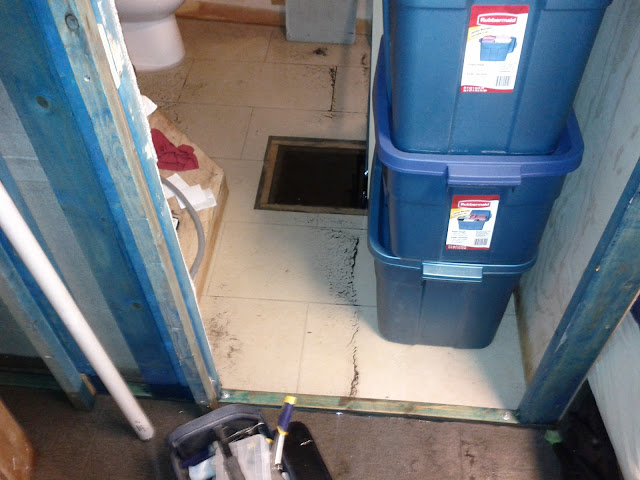 We were holed in a bad way considering that this level of water had come in within a few hours (3 hours with our most generous estimates). On top of that when the waves were particularly bad the motion of the boat was acting like a pump and pushing water in faster.

Eventually we were successful in beating the water back and switching to just a single 110volt pump with a float switch.

By the time everything was squared away and we had everything under control and the floor partially cleaned we could make an assessment as to what had happened exactly. My immediate thought was that we had popped a through-hull. I checked both of them even when we were still pumping out (Side note: Water at this time of the year is freaking cold!). I felt no current of water from either of them. Even when the bilge water had been drained sufficiently to have a good look the weren’t leaking. I could hear the water pouring in though so I took my waterproof camera (just incase I dropped it) and started taking photos below the plating to see what was going on when I snagged this photo. 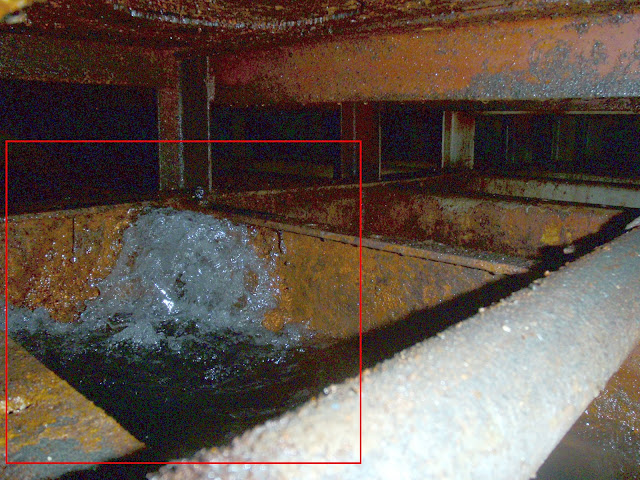 We had been holed there. After examining the photo I noticed that there was a round hole in the deck plate above where the hole was. The reason we can’t get at it is that there is concrete on top of the deck plates. We had beaten the water back for this night though and so we’d start anew tomorrow which by this point was fastly approaching as it was 11:30pm by this point.

During all this I had kept in constant communication with my parents up north giving them updates when I could. J was helping me keep warm and help with getting tools and clearing out the cargo hold as much as possible so things could dry. Martini (who I shall stop referring to as “The Dumb One”) eventually calmed down and Cosmo… still didn’t really give a crap. Ahhhh cats.

J and I grabbed sleep when we could. I had J sleep in the galley on our guest cot so she could stay warm and dry. I slept in the cargo hold so if the water got high again I’d know by virtue of getting wet. Not that I slept anyways but regardless.

Tuesday the storm was still raging and although Dad and Mom wanted to help I didn’t want them to risk getting stuck down here or try to brave the harbour incase it was a mess. J and I stayed on the boat all Tuesday to make sure things didn’t get worse and so I could spend time installing a high water alarm and trying to catch up on the sleep either of us didn’t get over the last 24 hours. I also rearranged the pumps in the bilge a bit so we could close the hatches to them to avoid breaking our legs by accident and keeping more heat in the boat (It’s amazing but you do lose a LOT of heat through an open bilge hatch).

Dad and I started planning to have him and Mom come on down to the boat with some specialty tools for cutting through concrete and tile so we could get at the problem area on Wednesday. My next update will start covering that period and the temporary fix he put in place with Mom’s and J’s help along with our plans for the upcoming week to get us ready for winter.

This article was posted in Boat, Captains Log and tagged Boat, Hurricane Sandy.
Follow comments with this RSS feed.