Not this past weekend but the one before we finally got to install a new staircase in the boat down into the cargo hold… This would in fact be the 3rd system put in so far but it is the last. Lets go over the systems I had (sadly I have no photos of them). 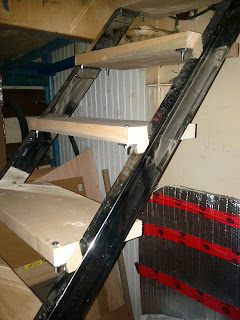 The stringers side on of the new staircase. 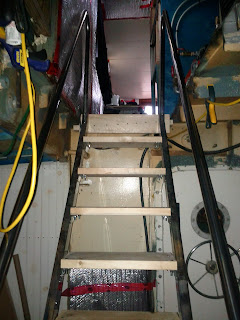 Right now the steps are pieces of 2×10 spruce. Later on they’ll be replaced with mahogany. 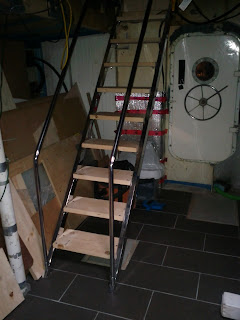 That corner of the cargohold also acts as material storage for paneling etc. Eventually we may be building a laundry room there by walling it in possibly.

These steps are incredibly comfortable to walk up and down. The neat thing is that although they look thin and they do flex a bit when you walk up and down them a bit they’re strong enough to practically park a car on. I also have to modify the hatchway a bit since my head nearly hits some metal on the way up and down the stairs. I’ll be doing that after I finish a through hull fitting to fill the water tanks. I’ll do a post about the water system and all the hookups once I get that all done.
This article was posted in Boat, News.
Follow comments with this RSS feed.